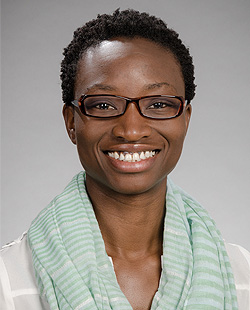 How do black women experience gynecologic cancer-related healthcare, and how can their experiences be improved? What societal factors exist that contribute to different (and often worse) gynecologic cancer outcomes for black women? These are questions that Dr. Kemi Doll, a gynecologic oncologist at the University of Washington, seeks to explore and understand through her research. Kemi is conducting multiple projects and initiatives focused on improving healthcare for black women diagnosed with gynecologic cancers. We featured one of those projects in the September 2017 Patient Advisory Network newsletter, which is looking to interview African American women with cancer in the lining of the uterus (also known as endometrial cancer) about their experience with their cancer symptoms, diagnosis, and healthcare. Recently, Kemi and her team of community organization partners received funding from PCORI to build the Endometrial Cancer Action Network for African-Americans (ECANA). Over the next two years, ECANA will create space for African-American women affected by endometrial cancer for empowerment and health – through knowledge, community-building, and action. This community-focused aspect of her work is necessary, Kemi says, because “The community of women knows their truth, knows their history. They can tell us what is going on.” Because of this, she notes, “It is really important to me that this research is not one-sided.”

When asked why she chose to focus on endometrial cancer, Kemi points to the massive racial disparity in outcomes and survival rates among black and white women: “Endometrial cancer is the most common gynecologic cancer; it affects one in 37 women in the US. It’s four times more common than cervical cancer, and yet I don’t think it has the same visibility and public awareness. Most women are diagnosed at an early stage and are treated effectively. There is an over 80 percent 5-year survival rate—hence its reputation as a ‘good cancer.’ But there is a flip side; it also is responsible for one of the largest racial disparities among cancers in the US. The black/white mortality gap in endometrial cancer is worse than breast or colorectal cancers. The burden—the rate of cancer—is about the same for black and white women; however, the rate of dying from it is extremely different. Black women have a 55 percent greater 5-year mortality rate than white women after diagnosis.”

This disparity drives Kemi every day to answer the questions of why black women are dying at much higher rates from endometrial cancer, despite having similar rates of diagnosis as white women. “Black women are dying from a disease we can detect early, we can treat, and most people can survive,” she notes. “We have to ask why that is happening. We know black women have higher rates of ‘high-risk’ histology types, but this does not account for how large the mortality gap is. Recently, there has been a lot of focus on potential molecular or genetic causes, but we cannot blame this solely on biology. It’s also not just related to poverty.”

Kemi’s research is focused on identifying the factors that can be modified (i.e., those not related to genetics or other biological characteristics) that influence this disparity and what can be done to minimize or remove those factors. “Biology is complex; cancer is complex. I would never dismiss that,” she says. “But that is not a reason not to try to narrow the disparities we see in any population by eliminating the non-biological factors. These we can solve. There are very smart people working in biology and genetics and I wish them all the luck. But even if they do find some answers, if we still haven’t removed the disparities resulting from social categories, we won’t make any progress in ensuring that all women have the best chance of survival if diagnosed with this disease.”

To learn more about the CERTAIN Patient Advisory Network, visit us at becertain.org.